Duplicate entry in off topic list in the Android app

When flagging a question as off-topic in the Android app, the reason list has a duplicate entry. The following reason appears twice:

This question does not appear to be about computer science, within the scope defined in the help center. 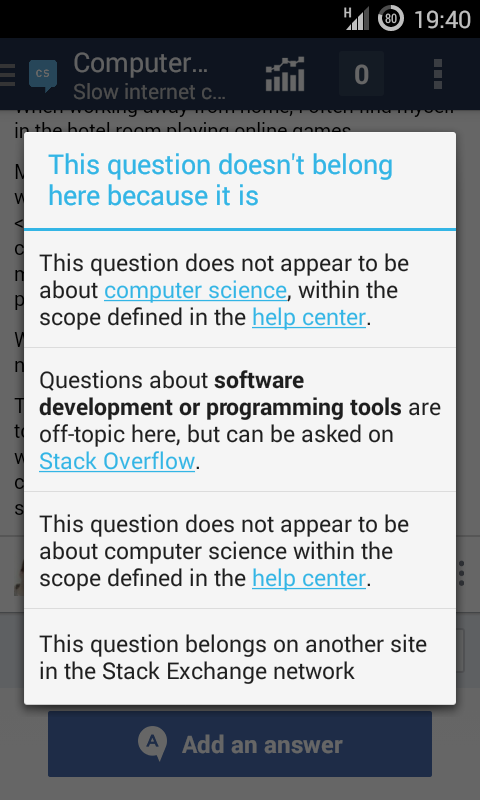 (This issue has also been reported on the main meta.)

The off-topic list is different depending on whether you have more or less than 500 reputation, which is the threshold between flagging and closing. The list contains:

That last point is a bug in the Stack Exchange app: it should show the same message as the website.

On the website, for flaggers, there is no duplicate entry, but it's as bad if not worse: there are two entries among which the choice is not clear, “does not appear to be about computer science” and “has nothing to do with computer science”. For close voters, it's fine: you can choose to use the generic “not about CS” reason, or you can enter a comment to explain why the question is off-topic.

We could fix this problem for flaggers by removing the “not about computer science” site-specific close reason, and keeping only the network-wide “blatantly off-topic”. But this would introduce a problem for close voters: there would no longer be a generic off-topic close reason, for questions that are just that, off-topic. The first close voter would systematically have to type a comment (subsequent voters see a list where that comment appears as an extra option). We regularly get all sorts of off-topic questions here; mostly “how do I fix my computer” but also pure math and others.

My preferred solution would be to bring back the generic off-topic close (or flag) reason for everyone. It used to exist, but was removed to introduce close reasons with associated comments, which is of dubious utility.

Not the answer you're looking for? Browse other questions tagged bug status-completed close-reasons custom-close-reasons .

7
A hard stance against the soft-question tag
4
Typo in the list of reasons for closing a question
7
Closing questions that are too broad
8
Missing MathJaX in the duplicate subtab of the close review queue
2
Duplicate on other SE site
8
New close reasons: unclear, too broad, opinion-based, and custom sub-reasons off-topic
2
Closing as duplicate
2
Why is there a change in the privilege amounts needed for most actions?
8
Project topic and course selection questions